The Shuttle’s Final Flight … Is It Just Me or Have We Lost Something? 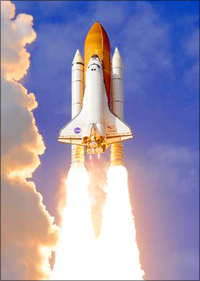 Just after the Columbia disaster I was speaking with one of the astronauts who was in Houston helping with the investigation. We spoke on the phone as he took a break from combing the countryside for pieces. He told me that the astronauts felt they were risking their lives every time they flew and especially upon re-entry and landing. He didn’t think the shuttles were such a great idea from the start.

I know the shuttles were not the optimum space machines, but they symbolized something. Maybe they were the trailing end of the Kennedy spirit; we felt such exhilaration in the belief that all things were possible and that unbounded imagination was an asset. But we’re thirty years older now.

We’re all grown up.

We are respectably all grown up. The lesson seems to be that youthful exuberance and optimism must give way to sober cynicism, and that the thirst for knowledge must be tempered by the grinding realities of budgets and politics, where vision might be just an encumbrance.

So my sadness goes beyond mourning the end of the beginning of the space age. Rather I mourn the loss of hope in the future and the confidence to know that, yes, we really can do whatever we set our minds to do. I mourn that our world today has become cynical and turned in on itself with shadowed, darting eyes. But most of all I mourn the loss of the infinite frontier, a universe without limit that says to us, come if you dare, and we respond, “You bet we dare.”