How the War of the Ghosts Helped Find the Sydney

This is the first installment in a series of monthly articles entitled Reliably Unreliable, based on the unreliability of the mind/brain with an eye to improving the quality of our thinking.

Psychology and neuroscience have shown us that memory and decision-making, and thus thinking itself, are constrained within the boundaries of our often unreliable memory and established mental processes.

Understanding the unreliability of these processes is the first step to upgrading our thinking.

A Lesson from the War of the Ghosts 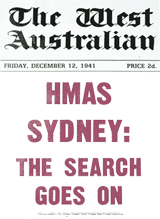 A fire fight ensued, the Sydney sank with all hands following the battle. The German ship was irreparably damaged and later scuttled, the majority of its crew surviving.

Six days later, 317 out of the 399 man Kormoran crew were located in seven boats and rafts scattered in the ocean northwest of Carnarvon, Australia. All that was found of the Sydney was an inflatable life raft, empty. The only witnesses to the sinking of the boats were the rescued German seamen.

In Australia skepticism regarding their truthfulness ran high: they were, after all, the enemy. Over the course of months and years that followed the Germans were repeatedly interviewed by the Royal Australian Navy in an effort to gain clues that would lead to the sunken Sydney.

But the coordinates and accounts varied wildly so that even those that seemed credible didn’t make sense.

The one thing that the Germans did agree upon was that at last sighting, the Sydney was steaming away under her own power engulfed in flames and was eventually lost from sight.

The Next Sixty Years

For the next almost sixty years attempts were made to locate the boats. The Finding Sydney Foundation, a non-profit established specifically to locate them, brought in oceanographers and salvage experts, but all their efforts proved fruitless.

Unlike the oceanographers and naval experts before them, they undertook a strategy that charted not ocean currents but human memory. From the transcripts of interviews of seventy of the rescued German seamen, they plotted the stories on a kind of graph.

They noticed that the resulting pattern bore a striking resemblance to a graph they had seen in the work of British psychologist Frederick Bartlett.

The Migration of Memory

In the 1930s Bartlett studied the migration of memory, i.e., how memories tend to drift over time, changing in somewhat predictable ways.

In what is probably Bartlett’s most famous experiment, he asked a number of subjects, all English college students, to read an original native American folk tale entitled The War of the Ghosts.

The subjects were asked to recount the story fifteen minutes later and then at intervals after that up to several years. As participants recalled the story over and over again it became more concise and contemporary.

Bartlett observed that the transformations in the recollection of the tale were not conscious but rather unwitting alterations that that allowed the participants to make sense of the story by fitting them to established schemas. The final versions of the story had very little to do with the original.

Memory, Bartlett found, was the active act of constructing past events anew: it was ever changing, even while being somewhat predictable.

Professor Kim Kirsner and Professor John Dunn, both cognitive scientists, applied their knowledge of human memory and language to sift through accounts provided by the survivors of the HSK Kormoran to reconstruct the position of the wrecks.

It was this predictability that Kirsner and Dunn used to decipher the accounts of the German seamen.

This formed the basis of the UWA scientists’ analysis through cognitive reconstruction, and ultimately that led to the development of a set of coordinates for the location of the sunken boats. Never expecting to have their predictions validated, Kirsner and Dunn turned over the coordinates to the Finding Sydney Foundation.

The wreck of HMAS Sydney (II) was found on Sunday March 16th, 2008, west of Steep Point off the western coast of Australia. The location was 2.7 nautical miles from Kirsner’s and Dunn’s coordinates in a planned search area of more than 6,000 square kilometers, sixty six and one half years after her disappearance.

What Bartlett, and Kirsner and Dunn proved is that memory is a shape shifter, somewhat dependable, yet altering it’s form every time it’s called up. “I remember” simply means, “these are the memories I’m constructing at this moment.” They may or may not be accurate and we have no way of knowing.