The passengers just had to sit there and wait.

By the time American Airlines did communicate anything substantive the Twittersphere was humming and passengers were in rebellion mode. This can’t be a good for the brand, especially for an airline that’s in bankruptcy.

Yet, brand building seems to be the last thing American Airlines worries about, as the two incidents below demonstrate. 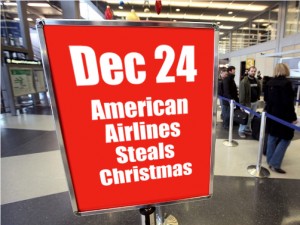 The passenger, Don, wanted to fly from Los Angeles to Seattle on Christmas Eve, 2012, to spend the holidays with his family whom he hadn’t seen in some time.

In October he made reservations for himself and a friend using American Airlines’ online reservation site. The site was difficult to use, freezing up and losing data a number of times.

It took Don, a veteran web developer, five tries to successfully enter his information, but finally the reservations went through, and confirmation was sent to him.

The day before the flight Don tried to check in online, but he got an error message saying simply that he’d have to check in at the airport. There was no indication of what the problem was. He thought nothing of it and went to the American airlines counter to check in the next day.

The person at the counter reiterated that there was a problem with his reservations, but she couldn’t give him any information. He would have to call American Airlines central reservation desk and speak with them directly. Since they had no direct phone line that he could use, he had to use his cell phone.

Only when he called did he find out the problem: both seats were in his friend’s name (remember the glitchy reservation web site?). The friend could travel in whichever of the two reserved seats she wished, but he would have to buy a new ticket if there was room on the plane.

Don asked to speak a supervisor. The supervisor’s opening salvo was a scolding to Don for the quality of the cell phone transmission. The call went downhill from there.

Don explained that the error was with American Airlines’ web site. They were obviously aware that he was the main passenger, since all travel information was addressed to him, and not to his friend with the two seats.

But the supervisor, unrelenting in her abrasiveness, said, no matter, the onus is on the customer to catch the error. He could still fly that night, however, if he bought a new ticket. Don said OK. But the price she quoted was far in excess of what he’d already paid. He ended up passing on her offer and missed the Christmas family reunion.

There’s more. Don’s son, who had flown to Seattle for Christmas, decided to come to Los Angeles to visit Don. He got up at 4:00 a.m. to board the 6:30 a.m. Alaska Air flight that took him to San Francisco and would connect to his 9:30 a.m. American Airlines flight on to Los Angeles.

Passengers Got Their Information from their Phones .. NOT American Airlines

The flight boarded, taxied, but was forced to return to the terminal. The cause was a mystery to the passengers and the airline wasn’t telling. The flight was delayed one hour, two hours, four hours .. eight hours .. the passengers waited for information. Those who had access to smart phones were able to get some information online. Finally, after a nine hour delay the flight finally took off.

Airplanes are complicated things: stuff happens to them. Better delay than death. But once again delay was not the only issue. Equally important was how American Airlines handled it.

The flight wasn’t delayed because of weather, or war or extraterrestrial hanky panky: the flight was delayed as a result of an internal problem with American Airlines.

It would not have required magical thinking to expect the airline to offer passengers some comfort during the nine hours – beyond the single breakfast voucher that they received immediately upon deplaning – or to give them some a snippet of truth to give them hope.

Don and his friend subsequently wrote to each of the American Airlines executives to relate their story and that of his son. Interestingly, out of all those letters, the only reply came from Steve Lasner on behalf of American Airlines’s general counsel, Gary Kennedy.

When a Corporate Attorney Answers a Customer Service Question .. the Customer Must Be The Enemy

Why would a company who valued its customers answer a first-contact customer service issue through their corporate attorney? The answer is, they wouldn’t. Only a company who saw customers as a threat would do that.

Mr. Lasner explained that American Airlines is not responsible for their web site: “when a you buy tickets online you’re acting as your own travel agent” and problems are the responsibility of the customer, not American Airlines.

This refrain was too familiar. (I find myself wondering what American Airlines would do if suddenly all customers booked by phone.)

And yet the communication from Mr. Lasner did not have to be the disaster it was. The only thing he needed to do for Don and his friend was to show that he – that American Airlines – cared. But clearly caring for customers is not an American airlines priority.

Sadly, there may not be any relief in sight for customers with the upcoming American Airlines-US Airways merger. In a sense it’s an understandable pairing given that these two airlines seem to be vying for he same top spots in the Department of Transportation’s list of the most complained-about US-based airlines. 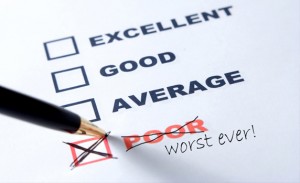 In 2012 American Airlines ranked third worst out of sixteen; US Airways ranked fourth, an improvement over their 2011 rank of second most-complained-about airline. In a recent letter to customers, American Airlines CEO Thomas Horton raved about the great variety of travel options that would be available to passengers due to this merger, yet he managed to say not a word about improved customer service. This is not reassuring to American airlines regulars.

Contrast that to Southwest Airlines who regularly ranks as America’s least complained about airline. They herd you, they box you, and finally funnel you down a chute to scramble for seats, and somehow it’s OK, because you get the feeling that Southwest likes you. Now that’s brand management.

PS: I suspect that American Airlines will punish the reservations supervisor. It’s typical for organizations like American Airlines that eschew responsibility for the culture they created and harbor to blame minor functionaries for manifesting that culture.